During the God’s Missionary Church conference of 1965, after nearly fifteen years of praying and planning, the possibility of beginning a Bible School was brought to the conference floor. The ministers and delegates were told that an adjoining sixteen-acre plot of ground, owned by Clair Knapp, was available. They went to the hill that day, August 5, 1965, and joined together in a season of prayer. By faith, they claimed the ground for God’s work and a school. The General Board was authorized to buy the land, providing the price was reasonable. 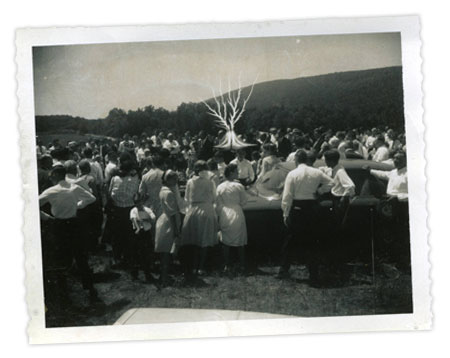 Before the next General Conference, the land had been purchased. A ground-breaking servicetook place on July 31, 1966, the closing day of that year’s camp. As a large number of people walked to the hill-top, one man remarked, “It looks like the children of Israel marching toward the land of Canaan.” The Lebanon Valley Gospel Band played a few appropriate numbers. General Superintendent, George I. Straub, called on Rev. Truman Wise to read the Scripture. While he read from II Chronicles 6, God placed His visible seal on the school. Rev. Arthur Thomas took a Polaroid picture, for the God’s Missionary Standard, of Rev. Wise reading the Scripture. Opening the camera, the photographer seemed to hear a voice saying, “This is the seal of my approval upon the school.” When the picture developed, a phenomenal seven-branched flame like forked lightning hovered over the Bible. God had clearly made it known that He was pleased and that His presence would continue with them. Rev. Steve D. Herron, that year’s camp evangelist, raised the first $25,000.00, that afternoon, for the school.

On September 6, 1966, the school opened with 52 students enrolling in grades one through eleven. Classes were conducted in the camp facilities. The dormitories were completely remodeled to accommodate classrooms. They were also rewired and winterized with insulation and a new heating system. Despite the inconveniences placed upon the teachers and students, it was a good year. Rev. Edwin Mayes served as Principal that first year. The steel structure, for the school building, was erected during the camp of 1967.

The second year of operation brought with it many welcomed improvements. Rev. George W. Stepp came to be the first president of the school. Rev. and Mrs. David Fuller, graduates of God’s Bible School joined the faculty at this time, and he became the High School Principal. The enrollment increased to 132 students. The college department was born this year, and of the 132 students, 15 of them were enrolled in the college courses. Eleven dedicated teachers worked and prayed together this school year. Very little murmuring could be heard as the students endured such inconveniences as walking over slippery clay to get to classes, or sitting in rooms that, on a few occasions, were slightly less than comfortable.
It was a welcomed relief when they were able to complete the second year in the new school building. The Music Department organized the first school quartet and trio during this second, very successful, school year. Six high school students graduated at the close of this year.

The school continued to expand in many directions. The enrollment for the third year reached a total of 195 students. At the close of this school year, twelve students were given high school diplomas, and the college witnessed their first graduates. Rev. LaDette Cooley, Music Director, organized the school’s first choir, an addition that has helped in the School’s publicity. The following year the enrollment went over the 300 mark.

May God be praised for the able men that He has brought forward to steer the school through its uncharted course. Rev. Howard Frey, following Rev. Stepp, did indeed prove to be a great leader and God’s man for the job. One of his major interests centered on the development of a library. In a short time a good basic library was established. Several residences for faculty were also added to the campus as a symbol of the forward thrust we enjoyed under his leadership. 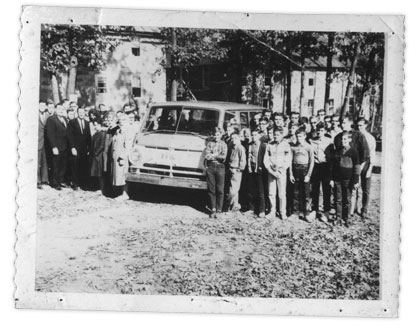 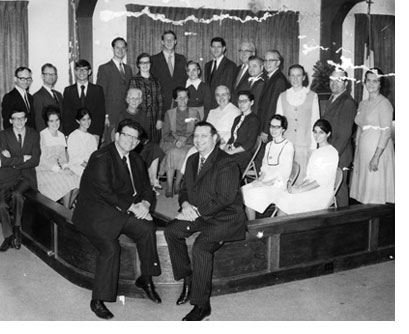 After Rev. Frey, Rev. Arthur Thomas was elected to the office of President. He served the school in that capacity for seven years; from 1972 to 1979. During this time, Rev. and Mrs. Earl Deetz, Jr., left their pastorate to come to Penn View to serve in an administrative capacity. It wasn’t long until he was appointed Executive Vice President. The Deetz’s brought with them an enthusiastic lift that proved to be just what was needed at the time. Many improvements were made around the campus during those years including landscaping, sidewalks, chapel renovations, etc. The Dollar-A-Week program had its beginning about this time, which really helped to ease the financial burden. This period of the school’s history is to be remembered for the many spiritual victories that were won, for the financial gains that were made, and for the academic and musical accomplishments.

The first record was made in 1972. Because of the success of this outstanding recording, the making of records and tapes continued. Nineteen musical recordings and five children’s recordings have been offered to the public for their spiritual enrichment.

In 1978, Rev. Deetz was involved in an automobile accident and was unable to continue his work. Again, God had a man. This time the man was Rev. Kenneth Walter. Rev. Walter began to assist Rev. Deetz in hopes that he would recover and be able to return to his duties. When it became apparent that this would not be the case, the General Board placed Rev. Walter in the President’s position. Campus development and school spirit continued through Rev. Walter’s years of service. His past experience as a builder was a valuable asset to Penn View, and everyone around campus was soon aware that Rev. Walter could still handle hard physical labor with the title of “President” on his door. During his term, the Hallam family provided funds for a new kindergarten facility. This beautiful building stands to the west of the main building as a memorial to Margaret Hallam and her son, Owen. Thank God for their dedication to Christian education.

The excellent dining facility on Penn View’s lower campus was completed during these years. God called on a layman by the name of Leonard Raub from the Lebanon God’s Missionary Church. This God-sent man, with his zeal and ambition, brought new hope to this project, and soon others began to show interest and bring their tools and finances to the work. In the summer of 1981, Rev. Straub’s vision for a new dining hall was fulfilled as the camp meeting crowd gathered for the first meal in the new building. Next, this vigorous leader and his faithful crew ventured a dormitory renovation. The beautiful exterior renovations required many hours of hard work. Thank God for the men and the money that made these needed changes possible. Although the physical changes show up the most, it must also be noted that these were good years in every other way. 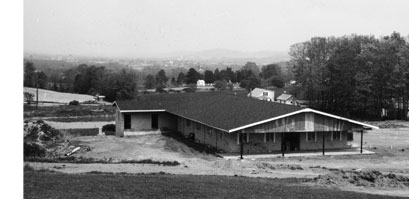 After laboring faithfully for five years, Rev. Walter felt that his work was done. Rev. Garry Spriggs, from Kansas City, was hired to fill the position as President. Although his stay was relatively short, only two years, he worked hard for the advancement of the school. The Tabernacle prayer room annex was renovated to become the Cooley Memorial Prayer and Music Studio. Also, the debt-reduction program was revitalized during Rev. Spriggs’ administration enabling the school to make substantial progress in the liquidation of its overall indebtedness.

In 1986, Rev. Paul Martin was elected to serve as President of this God-sanctioned institution. Rev. Martin brought much zeal and vitality, and began to work almost immediately on clearing the indebtedness on the large Administration/Classroom Building. In October, 1988, his dream came true. A mortgage burning service was held in the Straub Memorial Tabernacle to commemorate this accomplishment. Even though the total debt at the school was not cleared, a big load was lifted from the monthly obligations. Rev. Martin served faithfully until 1990, when he went to York, Pennsylvania, to pastor.

Rev. John W. Zechman succeeded Paul Martin, becoming the the first alumnus to serve as president. During his tenure numerous changes were made. Enrollment quickly grew in both the Institute and the academy, with students attending from nearly 20 states and several foreign countries. This growth brought about the necessity to construct new buildings.

In the spring of 1997, construction of a new dormitory began. It was dedicated in the summer of 2000 and named “Zechman Hall”. The area around Zechman Hall, the Miller Dining Center, and all through the lower campus was developed into parking lots and then paved, providing sufficient parking for the dormitory students as well as hundreds of visitors who come to the campus for various activities.

Rev. Zechman retired at the end of the 2017-2018 school year and was honored with the title President Emeritus. 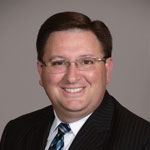 In the spring of 2017, Rev. Daniel P. Durkee was named as the incoming president, and he assumed the office at the end of the 2017-2018 school year. Rev. Durkee is a 1993 Ministerial graduate and the former Director of Public Relations.

In January of 2019 the doors opened to the Mason/McIntire student life center. This beautiful 25,000 sq. ft., 2-story building is located on the lower campus, adjacent to the Miller Dining Center. The Student Life Center is home to a full size gymnasium, student life areas, and a large music facility.

Through years men and women have been faithful to God’s calling. Staff and faculty continue to offer themselves as living sacrifices for the cause of Christian education. Hundreds of young men and women have walked from the halls of our school to find the path of life. Many are preaching the glorious Gospel at home and abroad. Others are teaching in Christian schools. Some are preacher’s wives. Others are medical missionaries, doctors, sanctified factory workers, leaders, and followers. Yes, they have issued from the halls of our school, and they make it all worth while. May God bless them in all of their pursuits of life, and bless Penn View with all that is needed to meet the challenge of training young people for the work of the Kingdom.

To God be all the glory, great things He hath done!